LogIn For Fans
Login or register
The hundredth shutout by Vasily Koshechkin A defensive refresh and a new role for Leipsic.
September 9 2021 Официальный сайт КХЛ
132

For some members of the hockey community, coaching is an inevitable destiny—a calling that runs through their veins perhaps even before a playing career has concluded. Metallurg Magnitogorsk bench boss Ilya Vorobyov is one such example, the son of a longtime KHL and National Team coach who absorbed his father’s training principles long before he ruled a bench of his own.

“With regard to my father, I still use some of his drills,” Vorobyov shared from Kazan, where Metallurg competed in the Taneco Champions Cup. “There are a lot of things that you remember from the past, when you were a young kid and sitting at the table when he was talking about hockey. I can use some of what he said as an example for guys right now. In a lot of things, he was right.”

Vorobyov began as a forward in the Dynamo Moscow organization before moving to Germany at the age of eighteen, where he would play the bulk of his career. His transition to coaching would result in a treasure trove of accolades—including two Gagarin Cup titles (one as an assistant and one as a head coach) in Magnitogorsk, three World Championship bronze medals and an Olympic Gold as assistant coach of the Russian National Team in 2018. After a stint with SKA Saint Petersburg, Vorobyov moved back to Metallurg in 2019, where he has remained as head coach ever since.

I caught up with the hockey scion on everything from Sergei Mozyakin’s brilliant career to new talent in the Metallurg pipeline.

GK: You grew up as the son of a coach. Was it a career that you always knew you would pursue, and did you take on any of your father’s influence?

Ilya Vorobyov (IV): Yes, probably. For the last couple of years when I knew [my playing career] was going to be done, I started to see the game from a different perspective too. I started looking more closely at the drills from our coaches, how they were handling things. With regard to my father, I still use some of his drills. There are a lot of things that you remember from the past, when you were a young kid and sitting at the table when he was talking about hockey. I can use some of what he said as an example for guys right now. In a lot of things, he was right.

GK: You played professionally in Germany for a time. What did you pick up from that experience?

IV: My kids were born in Germany, and we moved there when I was 18. It’s probably my second home right now, and we still live there part-time. It was a different culture and mentality, which was interesting, but it was a different hockey style too. There were a lot of Canadian and American guys at that time. In the city, we spoke German, and in the locker room, we spoke English. I learned a lot of things because many of the coaches were North Americans. Some years, it was a completely open league. The International Hockey League (IHL) closed, and a lot of guys came over—including the top ones. [Laughs] It was a hell of a year, a lot of fights. We had a really interesting group of characters, and as a team, we still hold the record on penalty minutes in Germany.

GK: How have you integrated such an international coaching bench and roster in Magnitogorsk over the years?

IV: I’ve had good teachers, starting with my dad. I worked with Paul Maurice, Tom Barrasso, Mike Keenan, Mike Pelino. You pick up a little bit or the best things, always. Whatever you think you can use. It’s still hockey. For the players, it’s about how you treat them. I'm not treating them in the old Russian style. That was a different time, different system.

GK: There are some stereotypes that go along with how players interact with coaches—the notion that imports talk back and Russians are more deferential, for example. Do those stand up?

IV: I think that has changed too. Some Russian players talk back right now, too. But it's a process. For some of the players, you’re used to telling them, "Shut up and do the job." For others, you might listen and say, “Okay, let’s do it this way.” It’s a process. Psychology is a big part of it.

GK: Magnitogorsk experienced quite a change in fortune last season.

IV: The explanation was pretty simple. We had COVID hit us last, and we played part of the season without 16 guys. We played with a bunch of kids from the junior team. After the whole team got sick except for two or three guys, we got back to our strength. I had a player that for one month, he didn't skate. It was only in the playoffs that I saw the way he used to play. We were the last team in the league to get sick because some of the teams were sick at training camp—the two teams in the finals, they were sick in August.

GK: You mentioned the reliance on junior players. Do you think last season’s experience may influence coaches to give young players more responsibility in the future?

IV: Well, it does, in part. In Russia, owners want to win. They don’t always see it as development of a young player because you have to show results, and results right away. That's a part of it too. In my opinion, if a young guy is ready to play, he should play—but not before he is ready.

GK: One youngster that I've enjoyed watching of yours is Danila Yurov. How would you describe his progression? I love to see that his head is always up, reading the game one step ahead.

IV: You're right. Absolutely right. He’s got the IQ and is thinking the game the proper way through, not like a boy. I really believe in him. I watched him for a year. He was playing even in juniors with a men's hockey brain. He's a very good skater and doesn’t use a lot of power for skating. He can use his power for shots or for anything else on the ice. He’s not getting tired quickly. Today he was playing with Brendan Leipsic and Josh Currie, and he was actually pretty solid. The only problem is that he is so young—I’m having a tough time giving him the right proportion of when he's playing and when he's not, because he’s playing with men. 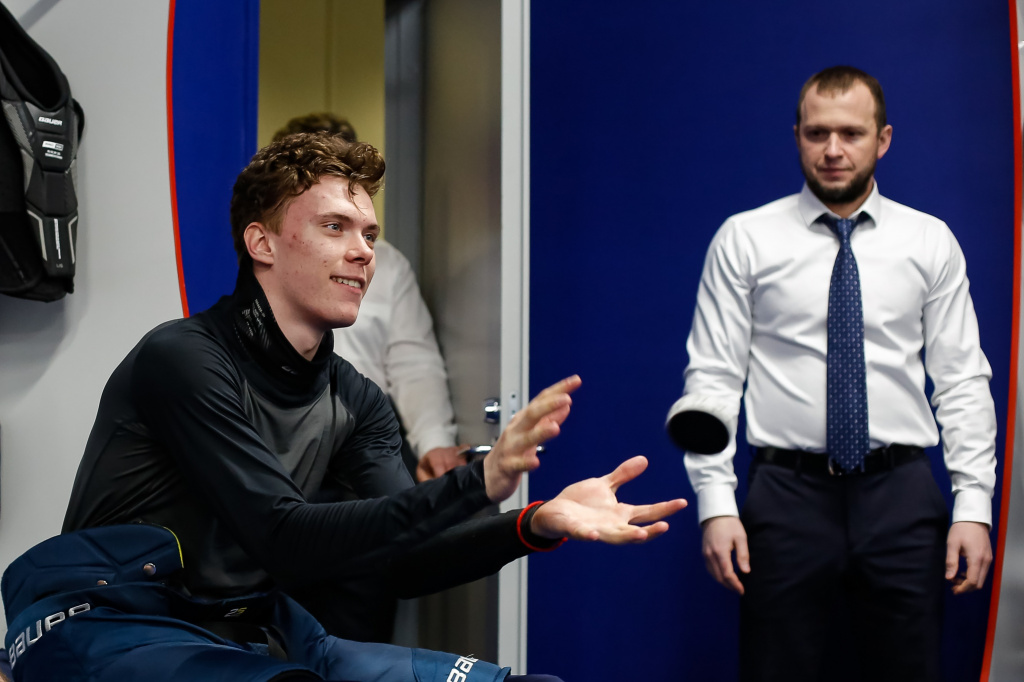 GK: Metallurg will soon retire Sergei Mozyakin’s number. You had one of the best seats in the house to his ascent. How would you describe him?

IV: He was a complete player. His shot— everybody knew that it was going to be high glove, but they couldn't save it because it would start low and go up for some reason. Nobody knows how he did it, but he did it. In so many ways, he was just ahead of his time.

We had this one game against Spartak. We were in Moscow and we had a very bad first period—absolutely awful—and went back to the dressing room at intermission. One kid was designated the DJ. So I turned to him and said, “We’re in Moscow, turn the music on and keep the party going!” I slammed the door very hard. We had three shots in the whole period. The one guy who understood it was Mozyakin. All of a sudden he had three goals, and we won the game. That's the kind of player you call a gamebreaker.

GK: Does he deserve a spot in the Hockey Hall of Fame?

IV: I think so—especially when you think overall ahead of [Boris] Mikhailov.

GK: Of all of your opponents, who would you say is either the best coached or the hardest to play against?

GK: What if we speak about last season alone?

GK: What is one lesson that hockey has taught you about life?

IV: To be a good coach, you have to learn every day. You learn from the guys. You have to learn, you have to analyze everything. That’s the biggest lesson—you analyze things differently year by year. You think about what kind of mistakes you made last season and why. How are we going to treat the same guys differently to push them to the limit? 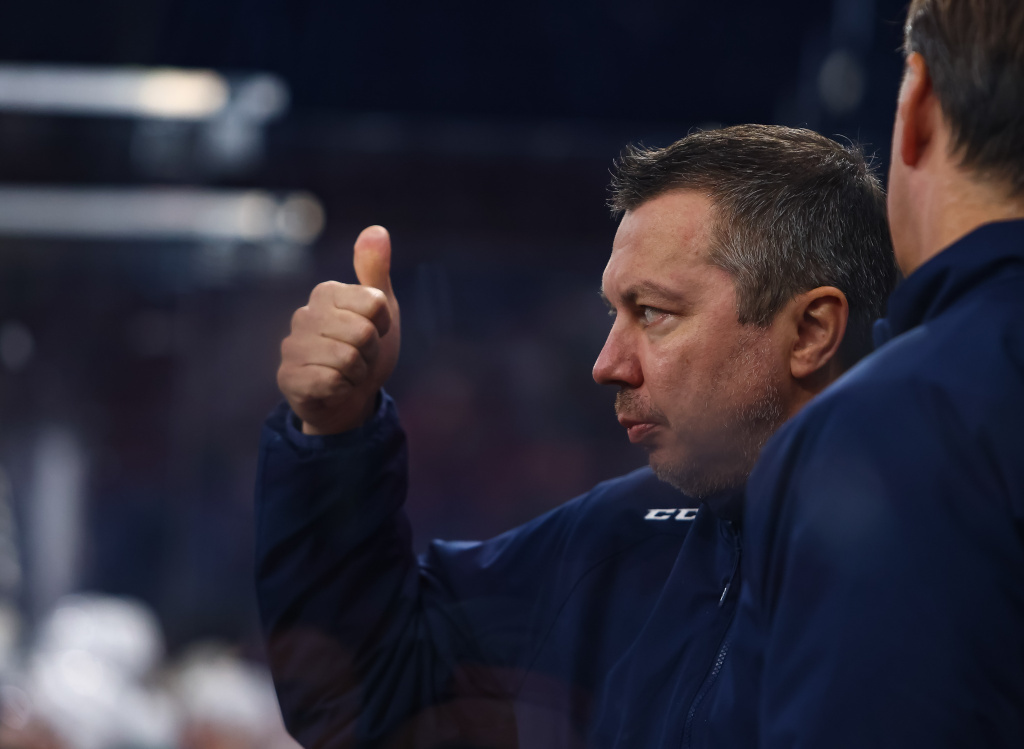